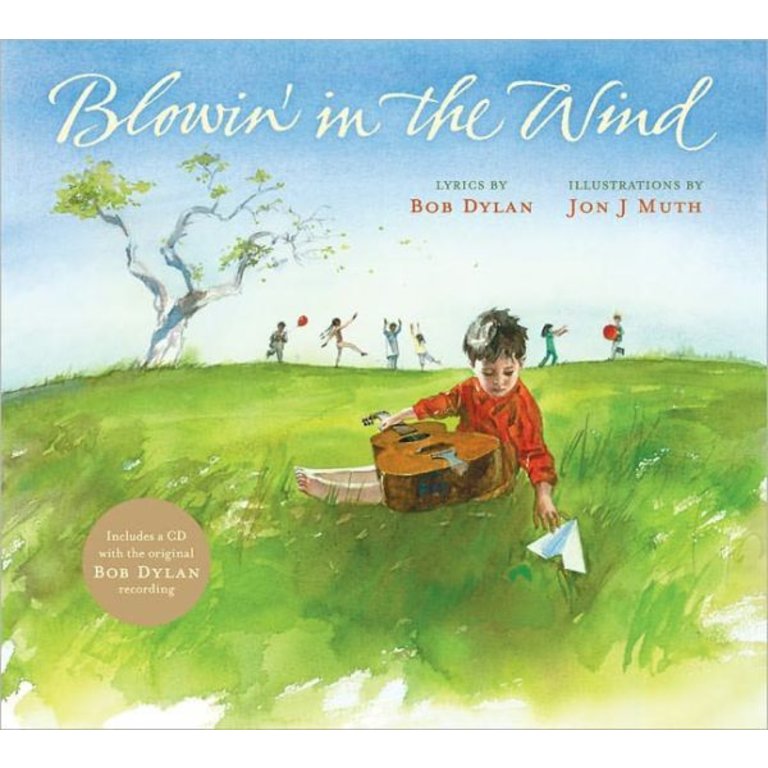 Blowin' in the Wind, Dylan/Muth

The answer, my friend, is blowin' in the wind.

With words by one of the most admired songwriters of all time and illustrations by a Caldecott Honor medalist, this powerful and timely picture book will be treasured by adults and children alike. Following the success of Man Gave Names to All the Animals comes a stunning version of Bob Dylan's beloved song: the anthemic “Blowin' in the Wind.” Jon J Muth is the perfect artist to interpret Dylan's poetic lyrics for a new generation of readers. This beautiful edition includes a CD of Dylan's original 1963 recording, plus a special note by renowned music columnist Greil Marcus, putting the song in historical context.

Bob Dylan has written more than 600 songs. His 46 albums have sold more than 110 million copies around the world. He has won numerous awards, including the Kennedy Center Honor, the French Commandeur des Arts et des Lettres, Sweden's Polar Music Prize, an Academy Award®, a Golden Globe®, and Grammys® too numerous to mention. In 2008, Bob Dylan was awarded a Pulitzer Prize Special Citation for his “profound impact on popular music and American culture, marked by lyrical compositions of extraordinary poetic power.” His most recent album of original material, Together Through Life, was released in 2009 and entered the number one slot in both the United States and the United Kingdom.

Jon J. Muth is a best-selling writer and illustrator. For over twenty years he created comics and graphic novels, culminating in the industry's highest honor, an Eisner Award for The Mystery Play. In 1999 Mr. Muth started what has been more than a decade in children's books. He is the author and illustrator of Zen Shorts, a Caldecott Honor book, which Kirkus Reviews called “as perfect a picture book as can be.” He illustrated the anthology A Family of Poems, by Caroline Kennedy. His book The Three Questions has been described as “quietly life-changing” by the New York Times. Mr. Muth's work has been translated into more than a dozen languages. He lives in New York.

Get Up, Stand Up, Marley/Cabuay

Every Little Thing, Marley/Brantley-Newton
$16.99
By using our website, you agree to the use of cookies. These cookies help us understand how customers arrive at and use our site and help us make improvements. Hide this message More on cookies »