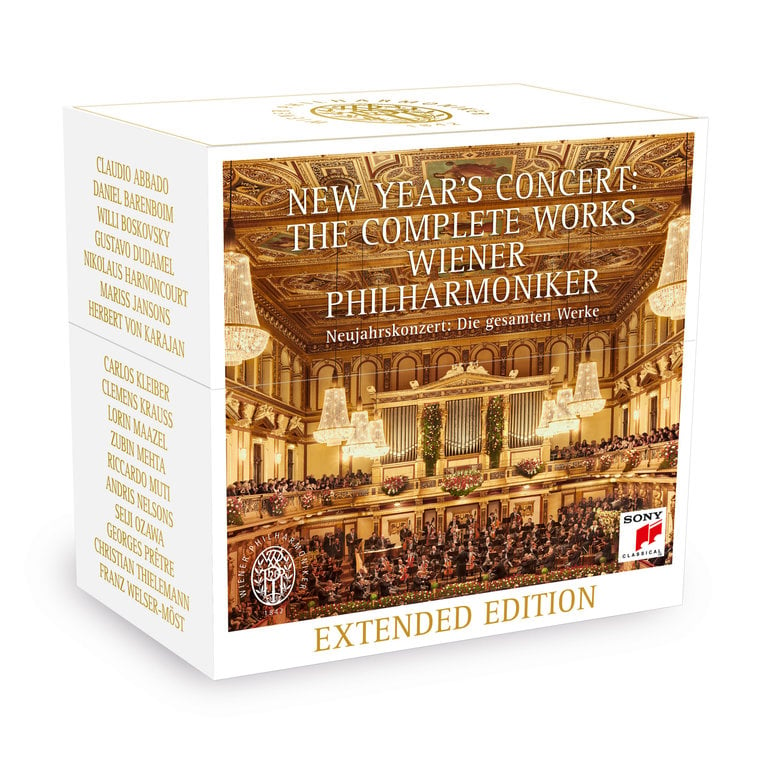 In celebration of the 75th anniversary of the greatest media event in classical music, Sony Classical released in 2015 a complete edition of all the works ever played at the Vienna Philharmonic’s New Year’s Concerts. Performed in the Golden Hall of the Vienna Musikverein between 1941 and 2015, the iconic live performances were issued for the first time in a single box set of 23 CDs. This new extended edition updates this collection to include new repertoire through 2020.

This great tradition was launched on New Year’s Day 1941, when Austrian conductor Clemens Krauss presented an all-Strauss-family concert with the Vienna Philharmonic – in spite of his fears "that the after-effects of New Year’s Eve might have a detrimental influence on attendance." His concern proved unwarranted. Until his death in 1954 – except for 1946–47, when Josef Krips took his place – Krauss shaped the concert’s profile. In those years it was broadcast only on radio. Under Krauss’s successor, Philharmonic concertmaster Willy Boskovsky – who directed the concert no fewer than 25 times, standing with fiddle in hand as Johann Strauss himself had done – the TV broadcasts began and soon became an event enjoyed by audiences all over the world.

This distinguished roster – all with special ties to the orchestra as well as a special flair for Viennese music – conducts the Vienna Philharmonic on these discs in 357 compositions centered around the musical dynasty founded by Joseph Lanner and Johann Strauss in the 1820s, then carried on triumphantly by Strauss’s sons Josef, Eduard and, of course, the “Waltz King” Johann II. Other featured composers include the likes of Mozart, Schubert, Weber, Brahms, Berlioz, Suppé, Offenbach, Tchaikovsky, Verdi, Wagner, Richard Strauss, Beethoven, Czibulka, Lehár, Stolz and Waldteufel.

One CD is made up of stylish new recordings of eleven Strauss-family works that were given only a single performance, under Clemens Krauss or Josef Krips, during the early years of the New Year’s Day Concerts – occasions that were not recorded. (Two selections are included here from that first 1941 concert under Krauss, which was recorded.)

The accompanying booklet contains an essay by Dr. Clemens Hellsberg – long-time Philharmonic violinist, historian and former president – as well as images from the orchestra’s archives.

CD New Year's Concert 2021, Muti/VPO
$17.99
By using our website, you agree to the use of cookies. These cookies help us understand how customers arrive at and use our site and help us make improvements. Hide this message More on cookies »