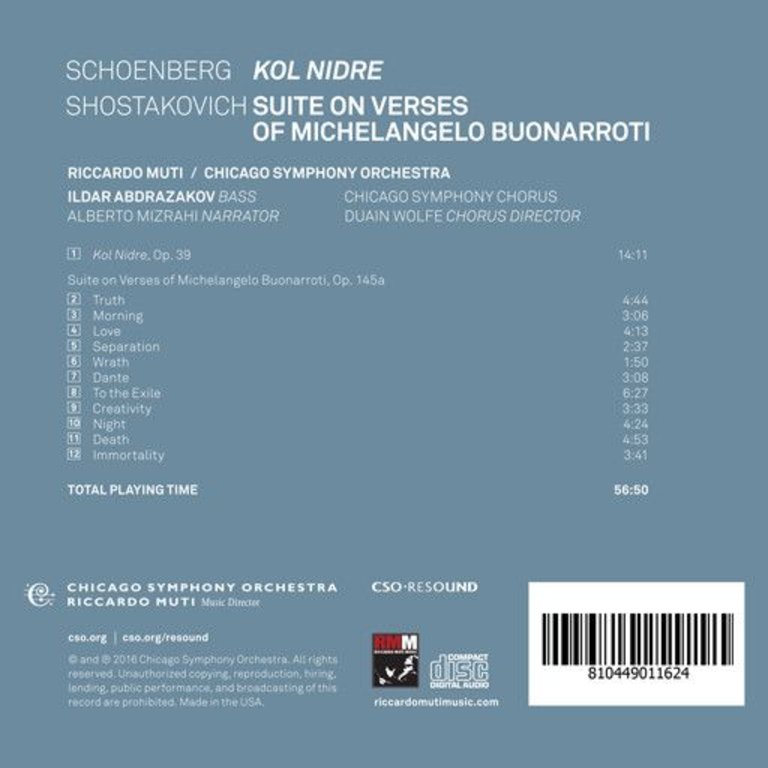 Kol Nidre showcases Muti conducting the CSO and the Chicago Symphony Chorus, with renowned interpreter of Jewish music Alberto Mizrahi as the narrator. Internationally acclaimed Russian bass Ildar Abdrazakov is the soloist in Suite on Verses of Michelangelo Buonarroti.

Arnold Schoenberg composed his Kol Nidre in 1938 at the request of Rabbi Jacob Sonderling of the Los Angeles-based Fairfax Temple. The Kol Nidre is a statement of faith associated with the eve of Yom Kippur — the Day of Atonement, the most solemn of Jewish holidays. Receiving its world premiere only a month after the Kristallnacht in Nazi Germany, Kol Nidre is a liturgical work in which a rabbi engages in reverent dialogue with a chorus.

Composed in 1974 for bass and piano, Dmitri Shostakovich's Suite on Verses of Michelangelo Buonarroti was later scored for full orchestra. Shostakovich regarded the suite in its final version as his last symphony. He died on Aug. 9, 1975, before the orchestral version could receive its premiere. Written in part to mark the fifth centenary of Michelangelo's birth, the suite features settings of 11 poems by the Italian artist and writer on topics ranging from love and creativity to death and exile. Shostakovich's spare settings of these verses underscore the gravity of the suite's heavier themes; those themes had personal relevance to the dying composer, who had lived nearly his entire life under Soviet rule.

Dmitri Shostakovich, Suite on Verses of Michaelangelo Buonarroti, Op. 145a