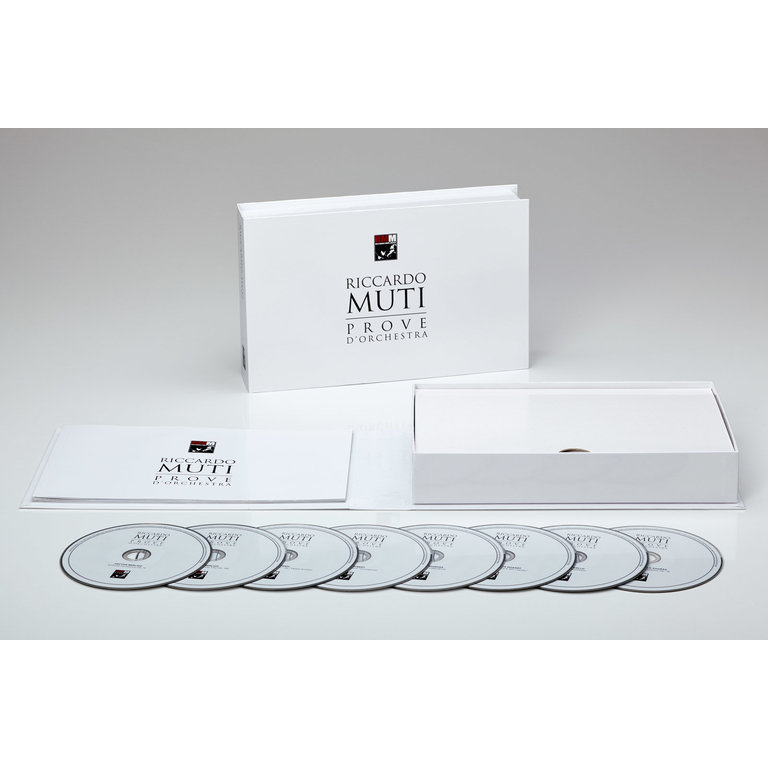 $129.99
8 DVDs presented in Italian with subtitles in English, French, and German with a corresponding 32-page photo booklet.
Share this product:

The “secret” of a baton: the baton of Riccardo Muti. The aim is to go behind the scenes to show not only the moment of the public performance, but also what happens during the rehearsals of Riccardo Muti, from the “art” of orchestra conduction to the work of musicians.

Through his orchestra rehearsals, Riccardo Muti leads the spectator on a journey into music. In this way you can better appreciate the indications and the clarifications of the Maestro: that enlightening, clarifying word is not used to show off knowledge, but to help the orchestra have a deeper vision of what it must perform and to help the audience face the Universe of Music.

A journey that fascinates both the simple enthusiast and the musician: the clarity of Maestro’s words, the meticulousness in the study performance of the score are instruments of the highest quality put in the hands of the audience.

This means that the DVD-Box Riccardo Muti in Rehearsal has a double value. On the one hand it constitutes a document of exceptional importance on the figure of Riccardo Muti himself, that is the human side: how he interacts with the public and performers – in a polite and elegant way, but always in balance between serious and facetious. On the other, it represents one of the main sources of the greatest gift Riccardo Muti has to offer to contemporary and future generations: his method.

This is not just cultural dissemination, it is an extraordinary document on the activity of one of the greatest conductors of all times.

Riccardo Muti in Rehearsal was awarded the Moige (Italian Movement of Parents) prize for the best TV programs 2016 “for introducing a new way of teaching music, highlighting its importance for the cultural growth of people since early age”.

CD Mercadante: I due Figaro, Muti/OGLC

CD The Best of Verdi, Muti/OGLC

DVD Tchaikovsky & Beethoven, Rehearsals & Concerts, Muti/OGLC
$59.99
By using our website, you agree to the use of cookies. These cookies help us understand how customers arrive at and use our site and help us make improvements. Hide this message More on cookies »