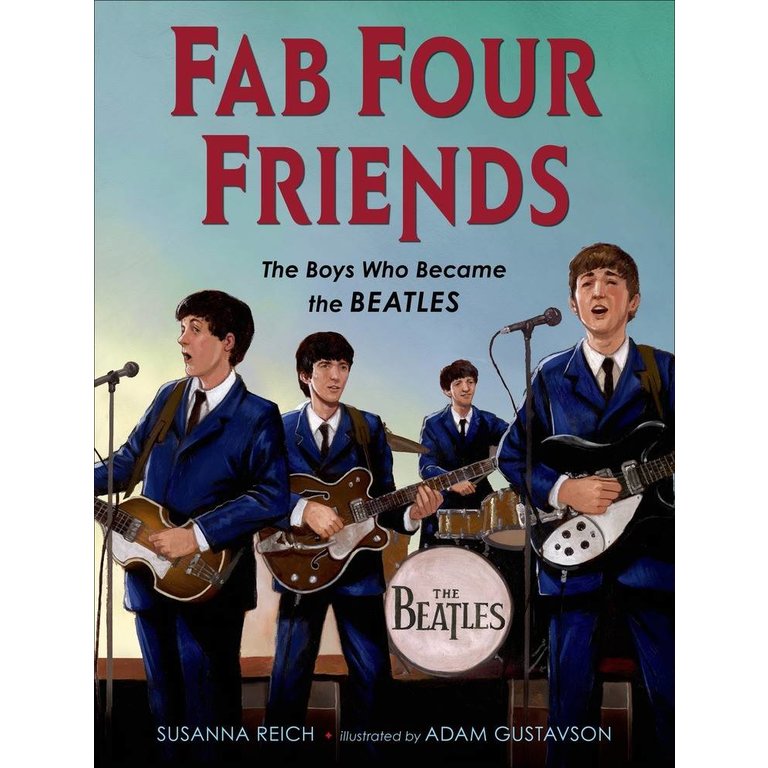 Fab Four Friends: The Boys Who Became the Beatles, Reich/Gustavson

In 1957 in Liverpool, England, a young lad named John Lennon and his band played music at a local church fair. In the audience was Paul McCartney, who liked what he heard and soon joined the group. Paul's friend George Harrison kept showing up at rehearsals until the older boys finally let him in. Eventually they found the perfect drummer, Ringo Starr, and the perfect name: The Beatles.

Told through a lyrical text and stunning paintings, this book spotlights four ordinary boys growing up amid the rubble of postwar England who found music to be a powerful, even life-saving, force.

Susanna Reich is an author of many books for children and has won such awards as an Orbis Pictus Honor and an SLJ Best Book of the Year, among other honors. She lives in New York's Hudson Valley with her husband, author Gary Golio.

Adam Gustavson is the award-winning illustrator of over twenty books for children, including Rock and Roll Highway: The Robbie Robertson Story. Adam holds an MFA from the School of Visual Arts and teaches at the University of the Arts in Philadelphia. He lives in New Jersey with his family and several guitars.

-40%
The Golden Thread: A Song for Pete Seeger, Meloy/McClure
$18.99 $11.39
By using our website, you agree to the use of cookies. These cookies help us understand how customers arrive at and use our site and help us make improvements. Hide this message More on cookies »