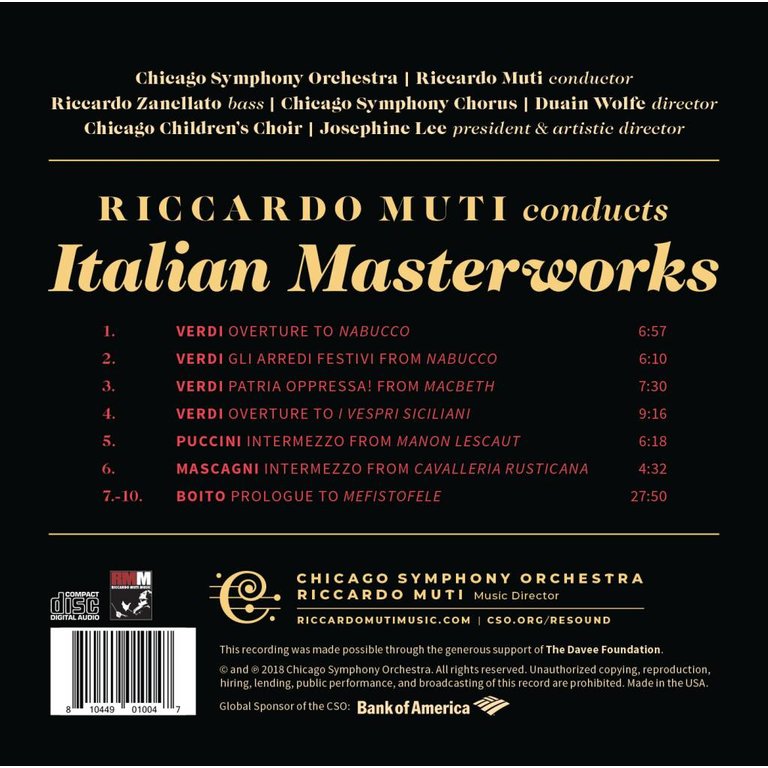 "No living conductor knows more about these scores and their historical context, has a closer regard for textual fidelity or a more practiced understanding of how to bring them to dramatic life on stage than Muti." (Chicago Tribune)

Now available on CSO Resound: overtures, choruses, and intermezzos drawn from masterworks by Verdi, Puccini, Mascagni, and Boito, brilliantly performed by Riccardo Muti and the Chicago Symphony Orchestra and Chorus. Muti has presented these works numerous times over his career, including countless performances during his tenure as music director of the Teatro alla Scala in Milan. The performances heard on this album were presented as Maestro's final concerts of the 2016-17 season. This album presents a virtuosic showcase of nineteenth-century Italian music in all its passion, joy, and heartbreak. Produced by David Frost, winner of sixteen Grammy® awards, most recently in January 2018 for Classical Producer of the Year, this release spotlights the magnificent connection between the Chicago Symphony Orchestra and Maestro Muti.

This recording was made possible through the generous support of The Davee Foundation.

CD Riccardo Muti conducts Italian Masters
$24.95
By using our website, you agree to the use of cookies. These cookies help us understand how customers arrive at and use our site and help us make improvements. Hide this message More on cookies »